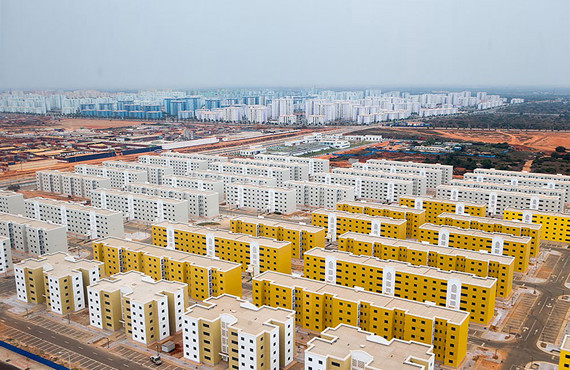 The total contract value of the first phase of KK New Town is US$3.535 billion, which is the largest single-construction project undertaken by Chinese-funded enterprises overseas under the EPC model. The project covers an area of 8.8 square kilometers, including 710 apartment buildings, 24 kindergartens, 9 primary schools, 8 middle schools, 2 substations, 13 opening and closing stations, 77 substations and other infrastructure, as well as roads in the area. Municipal facilities such as drainage, power telecommunications systems, traffic signal systems and greening projects, which were completed in four years, were hailed by Angolan President Dos Santos as "the most brilliant pearl in Angola's rebuilding crown".

The Luban Award is the highest honor for the quality of engineering in China's construction industry. It is reviewed once a year and awarded once a year for a company that has created a first-class project.

In November 2007, the EPC contract for Angolan Social Housing Project Kilamba Kiaxi Phase I was signed. With an overall building area of 3.31 million square meters, this project was the largest overseas housing projectundertaken by a Chinese company under EPC contract model.

The project was completed in October 2012. Angolan President José Eduardo dos Santos praised the Phase I of K.K. Project as the brightest pearl on the crown of Angolan reconstruction and the model for all social housing projects in Africa.

Angolan RED Social Housing Project CITIC Construction signed a framework agreement on the RED Social Housing Project with Sonangol in September 2010. According to the agreement, CITIC Construction would undertake the design, procurement, construction and infrastructure construction for housing in 20 plots in 14 provinces and cities across the country. The sub projects including 34,000 apartments in Luanda, Benguela,Namibe, Lubango and Zango are now nearing completion.